Prize money for the best young poet in Cumbria has been doubled this year to mark the fifth anniversary of a popular competition.

The annual Rydal Mount Wordsworth prize for young poets is organised by the descendants of William Wordsworth, and is open to students at all schools in the county.

This year the author of the winning poem will receive a cash prize of £100, plus a personal trophy, and the poem will be framed and displayed alongside the work of the famous poet in the popular tourist attraction near Ambleside.

The theme for this year’s competition is “A walk on the wild side”, was chosen by the poet’s great great great grand-daughter, Susan. She and other descendants of William will judge the poems, and the winner will be announced at an award ceremony at Rydal Mount on April 27.

Peter Elkington, the curator of Rydal Mount, who is organising the contest on behalf of the Wordsworth family, said: “We decided to double the prize money this year in celebration of our fifth event. The competition has attracted some wonderful work from young people over the years, and we are looking forward to seeing what this year’s entries surprise us with.

“It’s also a chance for a young poet to see his or her work immortalised alongside the poems of Wordsworth himself in his former home, and read by thousands of visitors.”

There are book prizes for the poets judged as highly commended in the primary and secondary school categories. Each entrant also receives a certificate signed by the descendants of William Wordsworth. 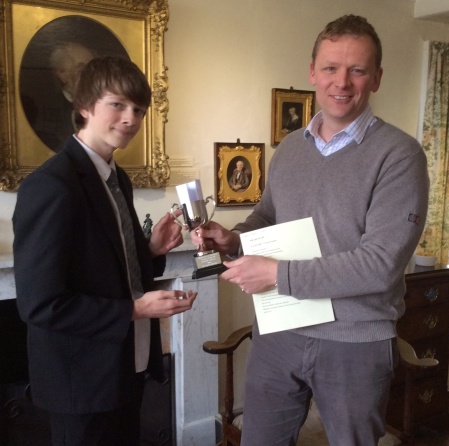 Last year’s winner was a 14 year old Jacob Currie, right) a pupil at Furness Academy, who took the title with his poem The Gap in Life after members of the Wordsworth family judged more than 150 entries from Cumbrian schools. His poem has been framed and is displayed at Rydal Mount for visitors to read.

The closing date for entries is Monday March 20.

Entry forms can be found here

or via the Cumbria education department schools’ information portal.