It was something of a pilgrimage for sisters Kika and Petra Markham when they came to visit Rydal Mount.

Kika was even clutching a biography of Dorothy Wordsworth, and both were enchanted to see the house and the gardens.

Kika Markham is the widow of Corin Redgrave, and last visited the Lakes before he died eight years ago. An actor herself, in a family of famous actors, Kika had just finished a run at London’s Arcola Theatre in the play, Not Talking.

She has appeared in many TV series including Holby City, Doctors, Mr Selfridge and Call the Midwife. She starred in the Ken Russell film Clouds of Glory , about the lives and loves of Coleridge and Wordsworth, which was filmed in the Lakes.

Her sister Petra Markham appeared in films including Get Carter and also in many TV series including Eastenders, Dr Who, The Bill and Bergerac. She was also in the very first episode of Z Cars.

They went on to visit Wordsworth’s grave in Grasmere. Kika said: “This is a wonderful experience for us. We both love Wordsworth and his poetry, and have never been to Rydal Mount before. His spirit is so clearly all around us here.”

It’s always a delight when we learn of the impact that Wordsworth and his beautiful home here can have on our visitors.

One in particular took the time to write to us after a recent visit..and to send a photo of himself enjoying the garden and the view. 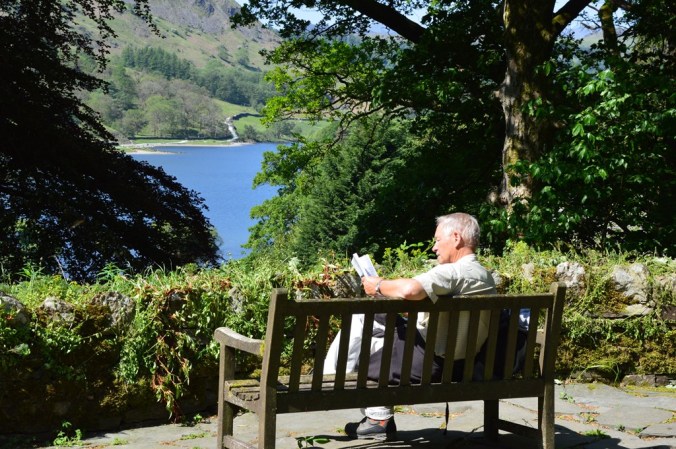 He is Michel Barrucand,  an admirer of Wordsworth and a retired professor of English literature at a French University.

He wrote to tell us how much he enjoyed visiting the place and musing in the garden: “It was a gorgeous time for me to sit on the bench and read some poems with the lake in view.”

He told us that he was currently reading from Wordsworth’s many letters, and highlighted a few sentences from a letter sent to Wordsworth by William Boxall, August 29 1836: “… You have here a knot of true & sincere worshippers … I verily believe there is no book but the Bible that is to them so full of inspiration. You would be delighted to see the beautiful appreciation with which they read you & I believe nothing short of a pilgrimage to Rydal Mount will suffice them that they may themselves tell you how much gratitude they feel towards you – I envy you, my dear Sir; & yet with what pleasure I tell you that your words & thoughts live so cherished in their “heart of hearts” – Can any poet wish for more than to feel that he has thus created happiness –“

“As a modest reader and scholar of romantic poetry, I exactly felt what is said in the letter when I visited this beautiful place,” Michel wrote to us. “And I walked out of Rydal Mount full of happiness and gratitude.”

He also thanked our gardeners, Helen and Pauline, and urged them: “Please, keep the place as enjoyable as I discovered it. It’s one way to say to the world that Wordsworth is still among us.”