A year of celebration is being planned to mark the 250th anniversary of the birth of William Wordsworth in 2020.

Events include talks, poetry readings, presentations, and a big family reunion when the Wordsworth descendants will gather at Rydal Mount – which will also celebrate 50 years being open to the public.

Hailed as one of the greatest English poets ever, William Wordsworth was born on April 7, 1770 in Cockermouth. His homes included Dove Cottage and Allan Bank before he moved to Rydal Mount, near Ambleside, with his wife Mary and sister Dorothy. He died there in April 1850.

The celebrations are being planned by the Wordsworth family who still own Rydal Mount. A family reunion party will be held on April 25, with dinner at the house following a walk across to Grasmere and Dove Cottage. It will mark the birthday of Susan Wordsworth Andrew, the great great great grand-daughter of the poet, and of Antony Wordsworth . 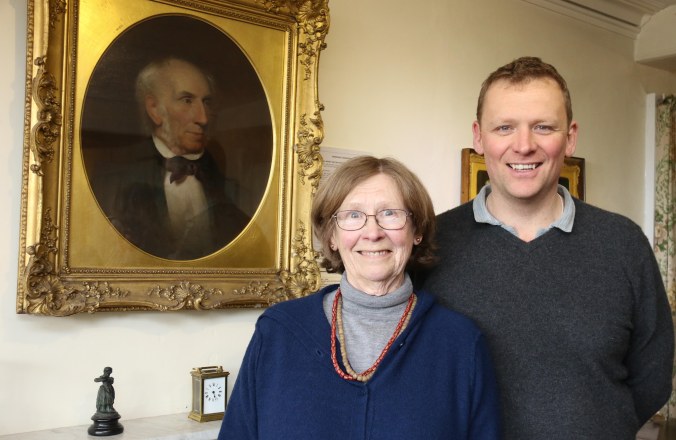 There will also be a family wreath-laying ceremony at the churchyard in Grasmere where William Wordsworth is buried.

Events at Rydal Mount will accompany the Reimagining Wordsworth project in Grasmere which aims to create new ways of telling the story of Wordsworth’s life and poetry.

The Wordsworth Museum will be expanded and modernised, with stunning views of the surrounding fells, giving visitors the chance to stop and reflect on the landscape that inspired the poet. Dove Cottage is being developed to provide a more authentic and atmospheric experience for visitors.

At Rydal Mount, an artist-in-residence, Helen Johnson, will produce pieces of work which will celebrate Wordsworth not only as a writer but also as an early environmentalist renowned for revolutionising English poetry and celebrating the importance of our relationship with the natural world.

And the annual Wordsworth Prize for Young Poets will invite pupils at schools throughout Cumbria to produce their own work on the theme of “Milestones”. A larger-scale international poetry contest is planned for later in the year. Christopher Wordsworth Andrew, pictured,  the poet’s great great great great grandson, said that people throughout the world would be able to share in the celebrations. “William was a true was a revolutionary whose work and thoughts are still relevant today. His ideas, and his expression of the beauty of the world around him, have an eternal appeal.”

A talk at Rydal Mount will open the pages on the life of William Wordsworth’s oldest child, John Wordsworth.

The world-renowned poet and his wife Mary had five children, two of whom died in infancy. But John, born in 1803, lived to the age of 72, was married four times (after three of his wives died) and was a vicar, latterly at Brigham Church between Keswick and Cockermouth.

His life has been researched by Muriel Strachan who will present the talk at Rydal Mount on November 14. 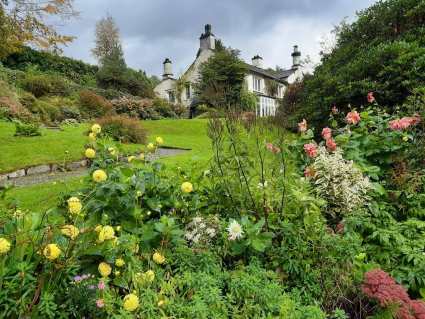 A one-time nurse and midwife who took a degree in later life and graduated at the age of 60, Mrs Strachan developed a fascination with the Wordsworth family when she and her husband Robert, a retired doctor, moved to live in Cumbria.

Her son, Professor John Strachan, the pro-vice-chancellor of Bath Spa university, and a specialist in Romanticism, is working on a book about the Wordsworth family and asked his mother if she would help research the lives of the children.

Mrs Strachan has also researched the lives of the two children who died in childhood, Thomas, and Catherine who, she discovered, is highly likely to have been born with Down’s Syndrome.

“John was a fascinating character,” said Mrs Strachan. “Not a writer, like his father, though he wrote many sermons!

“He married into one of the notable Cumbrian families, Isabel Curwen of Workington Hall, and they had six children. He had a further daughter with his third wife, Mary Dolan.”

The talk is at 2pm on Thursday November 14 at Rydal Mount and entry is free. Booking here: https://www.eventbrite.com/e/john-wordsworth-being-william-wordsworths-son-tickets-76932772995

A collaboration between one of the north’s leading independent cinemas and the home of the poet William Wordsworth here at Rydal Mount will bring a new film festival to the Lake District next month.

The Inward Eye festival will be staged at Zeffirellis in Ambleside, with a series of 26 feature films – shorts, new releases and classic movies to be shown over a long weekend. 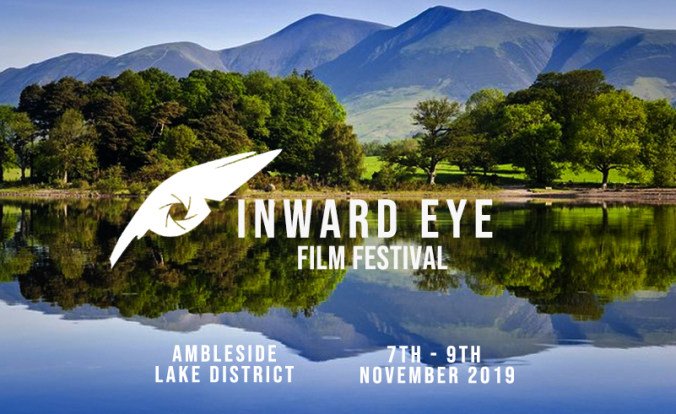 The festival has been organised by Zeffirellis MD Dorothy Smith along with film producer Charlotte Wontner of Hopscotch films who is a member of the Wordsworth family – owners of Rydal Mount.

The idea came originally from the actor Brian Cox who visited Rydal Mount three years ago when his film The Carer, produced by Wontner, was given a special screening at Zeffirellis. Cox was so impressed with the award-winning cinema that he offered to be patron of a festival there. 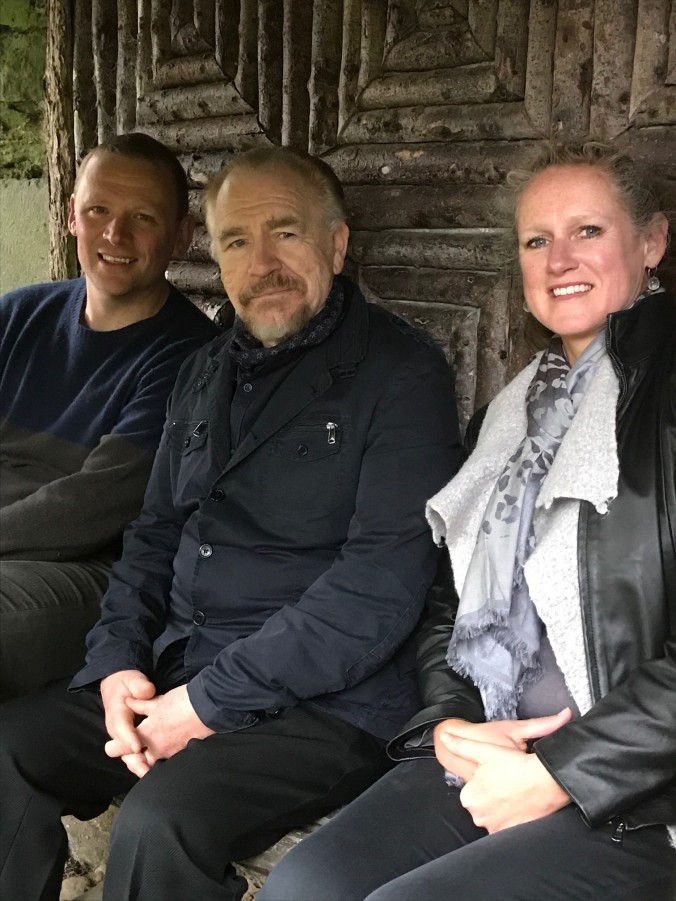 The festival’s title comes from the lines in Wordsworth’s most famous poem, Daffodils

For oft, when on my couch I lie

In vacant or in pensive mood

They flash upon that inward eye

Which is the bliss of solitude

And then my heart with pleasure fills

And dances with the daffodils

“The daffodils are nowhere to be seen at this time of the year but their presence is always with us thanks to Wordsworth, and we wanted to reflect this in our festival,” said Dorothy Smith. “With a nod towards the local artistry of Wordsworth’s works, Inward Eye’s carefully selected films will cover themes of, Love and War, Youth and Fear, and Time and Landscape.”

While some of the films have a nature theme or local location, the festival is aiming to attract a wide audience with an eclectic range of titles. The range from Franco Zeffirelli’s Romeo and Juliet to the Syrian war drama For Sama, and includes the cult favourite Withnail and I which was premiered at Zeffirellis when it was released back in 1987.

Documentaries include Harry Birrell’s Films of Love and War; the most awarded film from this year’s Sundance Festival, Honeyland; and Paul Wright’s Arcadia, a provocative and poetic new film exploring our relationship with the land.

Charlotte Wontner said: “Launching a film festival is like starting an epic journey. We are thrilled to be taking our first Inward Eye steps with the incredible team at Zeffirellis. We have a festival packed with new discoveries and literary and cinematic beauty that will excite and inspire our festival audience. We would love Inward Eye to become an annual event for film fanatics and emerging film talent from near and far.”

The festival runs from November 7 – 9 and full details, and booking, can be found here https://www.zeffirellis.com/inward-eye-film-festival

An artist has taken up “residence” here at Rydal Mount  to help celebrate the life and work of the poet William Wordsworth.

Helen Johnson, from Alston, will work at the house and gardens on a regular basis over the next 12 months, marking the 250th anniversary of the poet’s birth. 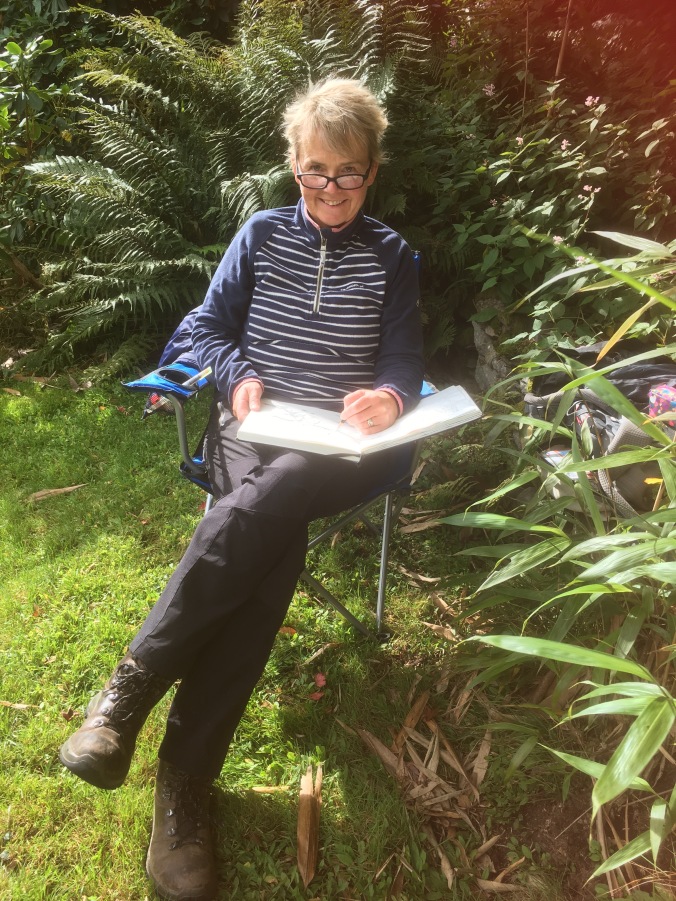 A former head teacher who is now a full-time artist, Helen will produce pieces of work on five themes which match the writing and ideas of Wordsworth. They are spirituality, family and relationships, emotions, nature, and excursions.

Helen taught at schools in Canterbury and the north-east before settling in Alston. She has a masters’ degree in art, and was originally an oil painter who now uses a range of materials – including non-recyclable plastic which is melted onto a canvas.

Admitting that Wordsworth’s poetry is a new-found interest, Helen says that she shares his interests in and concerns for the environment and sustainability. She is investigating various sustainable methods of creating works of art including making her own pigments.

Her most recent work shows the trees on the banks of the South Tyne and aims to comment on the crisis we face regarding climate change and the detrimental effects of our consumerism.

Helen said: “This is a wonderful opportunity and the most beautiful place to work.”

The curator of Rydal Mount, Emily Heath, said that she had been attracted initially by Helen’s pictures of red squirrels, which feature on greeting cards sold at the house. “We think that Helen’s work is fascinating, and we are thrilled that she will be working here with us for a year.” 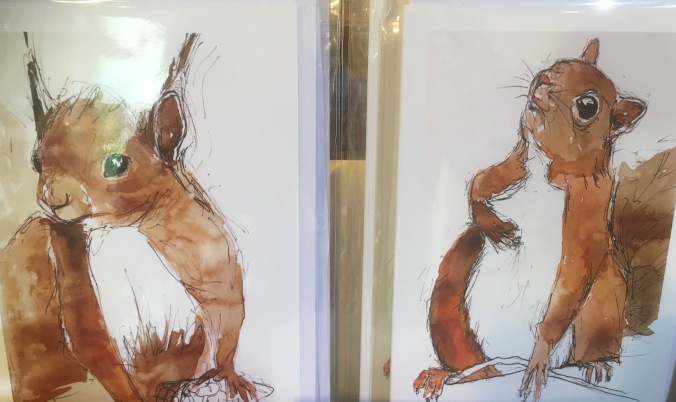